Many families celebrated, or plan to celebrate, holidays virtually this year through platforms like Zoom. It can hard to feel that sense of connection without the casual conversations and reminiscences around the dinner table, though. One way that you can foster that connection with your loved ones, plus give a gift to future generations, is recording an oral history! It’s easy.

That’s it! Hopefully you learned something new about your loved one, or got to set down a favorite family tale.

Before we could buy back-to-school clothes in a store, kids had to help their parents make the fabric that made their clothes! Learn about how weaving worked by watching this video.

Then you can try out some weaving for yourselves, using paper.

Grown-ups, you can print the files for the warp (below), then cut construction paper strips that are the same width for the weft. Contrasting colors makes it easier for kids to see what they’re doing. The smaller width is more challenging for elementary-aged kids, and larger width is just right for preschoolers and kindergarteners.

This activity promotes fine motor skills, both with scissor skills and manipulating the paper. It also reinforces the math and critical thinking concept of patterns.

In 2020 the Little Compton Historical Society will join with history organizations all over the country to celebrate the 100th anniversary of the 19th Amendment guaranteeing women’s constitutional right to vote. The Historical Society invites volunteers interested in researching and/or writing about the lives of Little Compton’s women, from the 17th century to the present day, to volunteer.

Throughout the winter, local women will be invited to write their own autobiographies. Volunteers will also be asked to interview Little Compton residents (year-round and seasonal), share their personal memories of local women, and/or research women from previous centuries. All the resulting histories will be permanently archived by the Historical Society and will serve as the inspiration for the 2020 special exhibition. All are welcome and anyone new to history research and writing will have ample opportunities for coaching by Historical Society staff and volunteers.

The Historical Society is also seeking the loan (or gift) of portraits, photographs, diaries, and letters relating to Little Compton women.

If you would like to contribute to the Little Compton Women’s History project in any way, please contact the Historical Society at lchistory@littlecompton.org or 401-635-4035.

The volunteers and staff of the Little Compton Historical Society work all winter (and spring) to prepare our new special exhibition for the summer. In 2020 our project will focus on women’s history.

The business office is often open, but we do encourage you to call (401-635-4035) before you visit. Sometimes our work takes us off site for research or meetings.

This winter you can:

This November the Little Compton Historical Society is pleased to host two traveling exhibits both opening November 9 from 1 to 5 pm at the Wilbor House Museum, 548 West Main Road, Little Compton. They are free and open to the public.

The first exhibition entitled “The Gardner-Dexter Shore Birds Come Home” is a one-day-only event offered just on November 9 from 1 to 5 pm. It is presented courtesy of the Museum of American Bird Art at Mass Audubon and features the work of curator Gigi Hopkins. Ms. Hopkins will speak briefly at 3 pm and there will be a wine a cheese reception from 3 to 5.

Around the turn of the last century Dr. Clarence Gardner and Newton Dexter were deeply involved in Little Compton bird hunting scene and created beautiful painted wooden shorebirds at Dr. Gardner’s Sakonnet Point summer home. Today their work is held in the highest esteem by collectors all over the country. Two of their finest pieces, dowitcher decoys from the collection of Jane and Ron Gard of Texas, will be returning to Little Compton for one afternoon only under the care of Gigi Hopkins, an expert in the field, and the curator of a recent Gardner-Dexter shorebird exhibition at Museum of American Bird Art at Mass Audubon. The two shorebirds will be joined by other bird carvings and decoys generously loaned by local collectors and from the collection of the Little Compton Historical Society. We invite you to bring your antique decoys and painted shorebirds for Ms. Hopkins to review that afternoon. Perhaps you own a Gardner-Dexter without even knowing it!

Reservations are not required.  Both exhibitions are free and open to the public, but donations are always gladly accepted. For more information, please call the Historical Society at 401-635-4035.

Gardner and Dexter’s dowitcher decoys from the collection of Jane and Ron Gard of Texas, image courtesy of the Museum of American Bird Art at Mass Audubon.

Cider and Donuts (while supplies last)

Tours of the Wilbor House Museum

We invite businesses, organizations, and individuals to take part in our first ever Community Market to sell your goods and services. All items welcome – crafts, antiques, vintage goods, and yard sale items. A great way to finally have the yard sale you’ve been talking about or launch your new business!

The Little Compton Historical Society will hold their annual meeting on Wednesday, August 14 at 7 pm at the United Congregational Church on the Commons. The event is free and open to the public.

After a 15-minute business meeting and the election of officers and board members, Professor Christopher Pastore, Associate Professor of History at the University at Albany, State University of New York, will discuss his new book, “Between Land and Sea” and the many ways European settlement has transformed Narragansett Bay since the 1600s. As one of the largest estuaries on the North Atlantic coast, Narragansett Bay served as a gateway for colonial expansion in the seventeenth century and the birthplace of American industrialization in the late eighteenth. Professor Pastore will present an environmental history of this watery corner of the Atlantic world, beginning with the first European settlement in 1636 and ending with the dissolution of the Blackstone Canal Company in 1849. Between Land and Sea traces how the Bay’s complex ecology shaped the contours of European habitation, trade, and resource use, and how settlers in turn reconfigured the physical and cultural boundaries between humans and nature.

Narragansett Bay emerges in Pastore’s account as much more than a geological formation. Rather, he reimagines the meeting of land and sea as a brackish borderland shaped by the tension between what English settlers saw as improvable land and the perpetual forces of the North Atlantic Ocean. By draining swamps, damming rivers, and digging canals, settlers transformed a marshy coastal margin into a clearly defined edge. The resultant “coastline” proved less resilient, less able to absorb the blows of human initiative and natural variation than the soggy fractal of water and earth it replaced.

Today, as sea levels rise and superstorms batter coasts with increasing ferocity, Professor Pastore’s Between Land and Sea calls on the environmentally-minded to make a space in their notions of progress for impermanence and uncertainty in the natural world.

A social hour following the talk will offer refreshments and the opportunity to purchase signed copies of “Between Land and Sea” as well as copies of the Historical Society’s new book “Little Compton a Changing Landscape.”

Rhode Island native, Christopher L. Pastore teaches courses in environmental history, early America, and the Atlantic world. He holds a Ph.D. in American History and M.S. in college teaching from the University of New Hampshire, a B.A. in Biology from Bowdoin College, and M.F.A. in nonfiction Creative Writing from New School University, where he has taught writing composition since 2003. He is also currently a Marie Curie Research Fellow at the Long Room Hub Arts & Humanities Research Institute at Trinity College Dublin, where he is combing through the archive for sources about salty environments.

Pastore grew up sailing, fishing and exploring Narragansett Bay. His journalistic work has appeared in the New York Times, Boat International, Cruising World, Newport Life, Offshore, Restoration Quarterly, Real Simple, and Sailing World, where he worked as Associate Editor. He also served as Editor of American Sailor and Junior Sailor, the official publications of U.S. Sailing, the sport’s national governing body. In 2005, he published a biography of Rhode Island yacht designer Nathanael G. Herreshoff (1848-1938) titled Temple to the Wind: The Story of America’s Greatest Naval Architect and His Masterpiece, Reliance (Lyons Press), early selections from which earned him the 2003 National Arts Club Annual Award for Nonfiction. 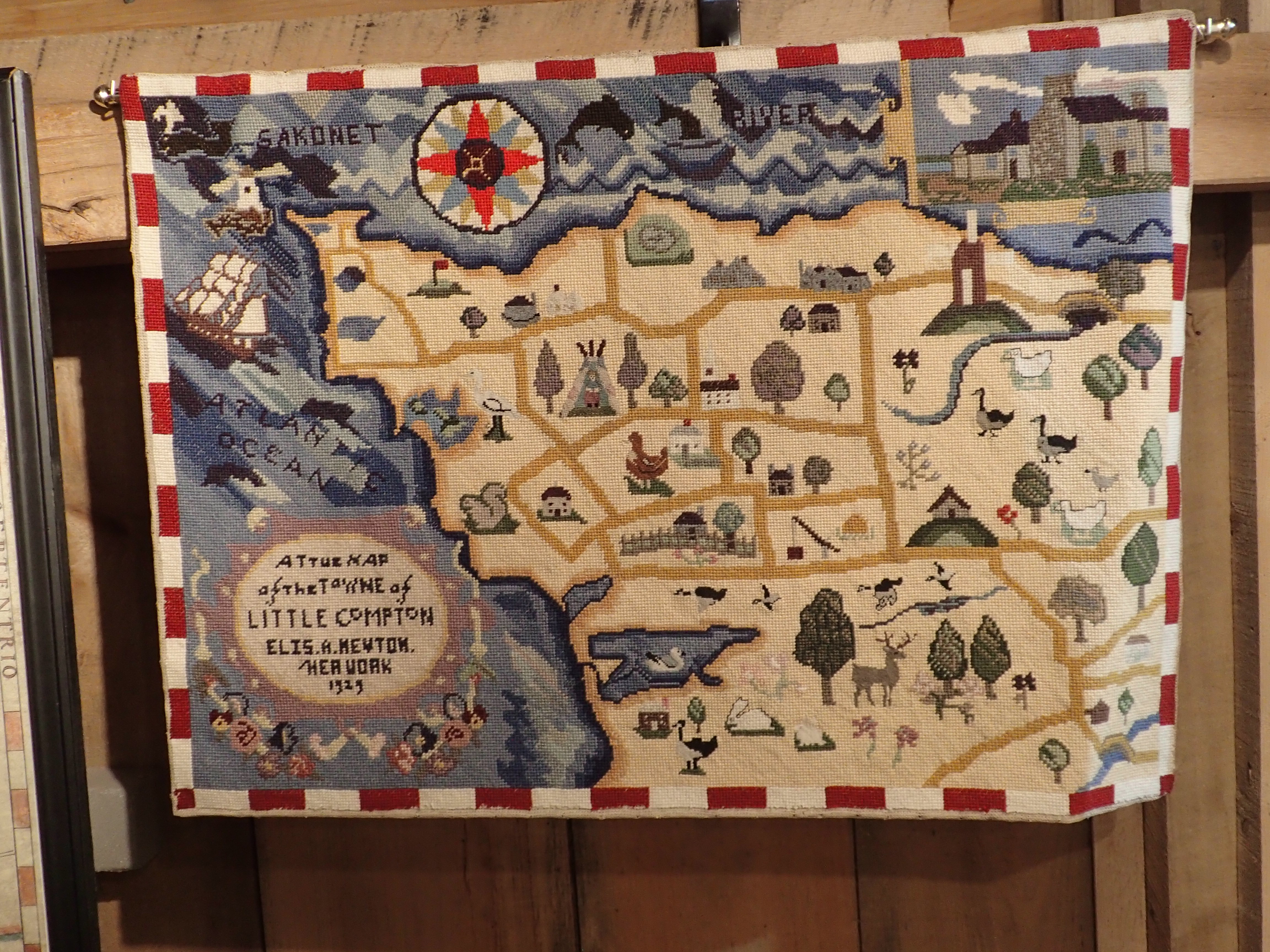 Maps from 1660 to the present tell the story of changing knowledge about the town, and the changing ways we’ve divided it, moved around, and divided it. Interested in one area? Pick up one of the dozen guides to places in town – from Adamsville to Warren’s Point – to learn more about that local history.

Artists have portrayed the Little Compton landscape since the nineteenth century, creating paintings and photographs that let us enjoy changing views of the town over time. Nineteenth-century paintings by Worthington Whittredge, George Burleigh, Sidney Burleigh, Reginald Marsh and Sarah Wilkinson and contrasted with works by contemporary photographers and painters. And check out the sheep in the attic, too!